Mareks was born in Riga, Latvia in the summer of 1990 in a musical family. With his father being classically trained singer and his older siblings already enrolled in music schools, it was no surprise that Mareks too would be immersed in the world of classical music. At five years of age, his father took him to the Emils Darzins Music school for meeting with one of the lead cello teachers there as it was decided that Mareks would be learning cello. Mareks was scared but also intrigued how this big sized violin would be different from the little violin his sister was playing.


While in third grade, Mareks moved to Liepaja and called this city home for the next ten years of his life. These were his most formative years for him as a musician when he discovered real passion for music and his love for cello. Mareks was lucky to have been placed in Dita Barona’s caring hands. She was not only his cello teacher, but also mentor, inspiration and someone who believed in him and helped to shape him into the cellist he is today.


In 2004 Mareks acquired his main cello - a 2002 Montagnana copy. He calls it the Sleeping Beauty because just like in the fairytale, the right hands can bring this instrument to life.


In the summer of 2010 Mareks moved back to Riga and enrolled in the Jāzeps Vītols Latvian Academy of Music in Māris Villerušs' cello class. Mareks was very grateful that he got to learn from one of the greatest cellists of our time as well as befriend him on a personal level. Beloved professor was always demanding and sometimes hard on Mareks, but he was able to raise his cello technique and musical ability to the next level. Māris Villerušs was also the reason Mareks decided to continue his studies in the Masters degree in cello performance. Sadly, Villerušs passed away in 2015 and Mareks finished his MA degree under the guidance of Ēriks Kiršfelds. Since 2015 Mareks has been working at the Vecumnieku School of Music and Art, where he teaches and inspires young cello enthusiasts.

Year 2014 was significant in Mareks's career as two albums were released. "Romantic Cello" was arranged and recorded by Mareks himself. Although it was a lot of hard work and definitely a learning curve, it has given him and his fans a new appreciation for some of the most beloved classical pieces while showcasing the beautiful cello sound. Album "Heartstrings" was a collaboration with Marek's sister Zaiga Vilde who plays kokle (Latvian national instrument) which includes some classical pieces as well as original compositions by a well-known Latvian composer Vilnis Salaks. Initially project “Heartstrings” started out as a fundraising tour in Germany at the end of 2014 and CD was a way to continue raising funds for the charity work helping large low-income families in Latvia. End of year 2015 brought another recording with a festive vibe. Album "Christmas Cello" includes some of the popular and traditional Christmas melodies arranged and performed by Mareks. In the summer of 2017 Mareks released his third and most popular solo album “Burn on the Stage” featuring his original composition "The Tulip Song". Recording, transcription and mixing has been all done by Mareks himself. This is an exciting, one of a kind cello album featuring popular covers performed by Mareks. “Burning on stage” is what Mareks strives to do at every performance and words-to-live by thought by the late professor Māris Villerušs, who advised Mareks to be fully dedicated no only when playing music but also give his 100% to any new endeavors of life.

Mareks has been active on his YouTube channel for a while now and can be seen in numerous videos both professionally done as well as the ones filmed in his living room or filmed by one of his fans. In 2016 a music video was released for a song “Таю От Любви ” in collaboration with Kristaps Čimbars. In the summer of 2017 Mareks released a video for his first original composition “The Tulip Song” which was followed by a video to his cover of “Every Teardrop is a Waterfall” and holiday special “Silent Night”. In 2018 Mareks premiered two very special videos featuring his musical creations. “Flow” is a reflective and soulful musical work that makes time stand still. Followed by another original composition “The Lost One” – an impressive collaboration with one of the leading electronic music performers in Latvia – Electricano. In the summer of 2019 Mareks surprised his fans with his take on Ed Sheeran & Justin Bieber’s single “I Don’t Care” – not only is it a feast to your ears, the video will take you to unexpected places as well. 2020 ended on a big high as Mareks had the honor of participating at the Liepāja’s city mayor’s New Year’s Eve reception for which an impressive video was filmed of Mareks performing Tom Walker’s hit single “Leave a Light On”. It was filmed on a fishing boat right in the middle of the city’s canal and clever placement of reflectors on the cello lit up the whole city.

From early on, Mareks has participated in different cello competitions, such as International K.Davidov cello competition or Juliusz Zarebski competition in Warsaw in 2008. Most recently, in 2016 Mareks successfully participated in several televised competitions such as "Ghetto Faktors” and "Supermikrofons" with the band The HiQ. In 2017 they were finalists for the national Eurovision selection show “Supernova”. He was also recruited by organizers to take part in Swedish talent show "Talang".
Although he calls Riga home, Mareks can be seen and heard performing in different European cities such as Helsinki, Copenhagen, Madrid, Vienna, Graz, Prague, Warsaw, Oslo, Vilnius, Tallinn, Rome, Venice, Berlin and others. In 2016 Mareks was invited to play in the Canary Islands. Stockholm holds a special place in Mareks's heart and is one city Mareks keeps returning to.
Mareks mostly plays and performs by himself but he also enjoys improvising with other musicians and DJs as well as playing in trios, string quartets and symphonic orchestras such as the Rock orchestra „Casanova”. He has been invited as soloist to perform with the Liepaja’s symphony. Mareks gives his all whether he is busking on the street or performing on a prestigious stage like Arena Riga, the Vidzeme’s concert hall, Embassy of Latgale “GORS”, Latvian Museum of Art, Bīriņu Palace, J.Vitols Latvian National academy of Music, Liepaja’s Olympic Centre, The Small and the Great Guild, the House of the Blackheads and others.
In the fall of 2019 Mareks was nominated and won the creative personalities’ achievement award “Lauru LaPPA” and the title “Exceptional Debut” in the event category. In December of 2020 Mareks created holiday magic through a special virtual concert in cooperation with the shopping center SPICE. While enjoying the most beautiful cello music, viewers were also treated to the amazing sights and lights of Riga. As it was filmed in one of the tallest buildings in Latvia - Z-Towers, it lets you overlook the city from a bird’s eye view.
Every year Mareks closes the year with numerous charity and Christmas concerts and is always excited for all the projects that the new year might bring. Stay tuned!

NOT ONLY A CELLIST

Although playing cello is his main act, Mareks also likes to compose and transcribe music and teach cello. He has also enjoyed acting, modeling as well as getting involved with charity work....
read more 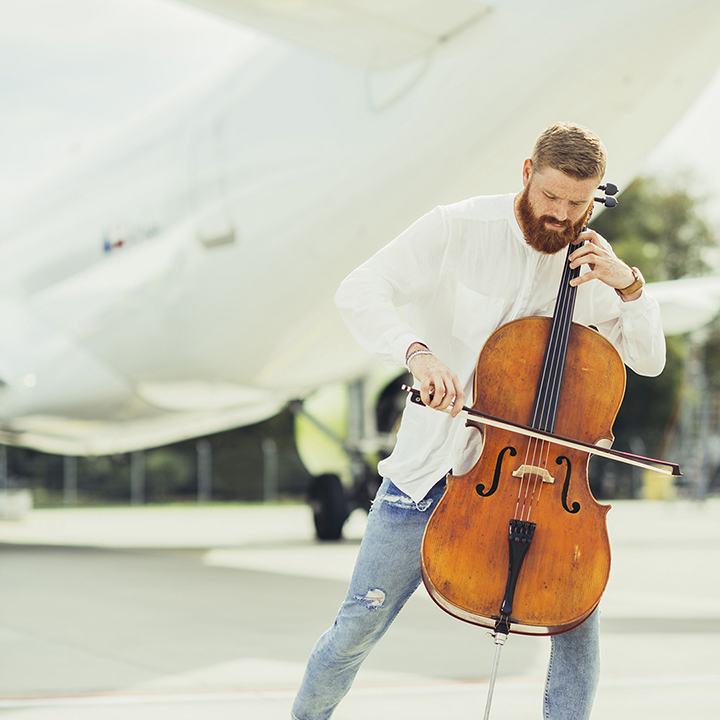 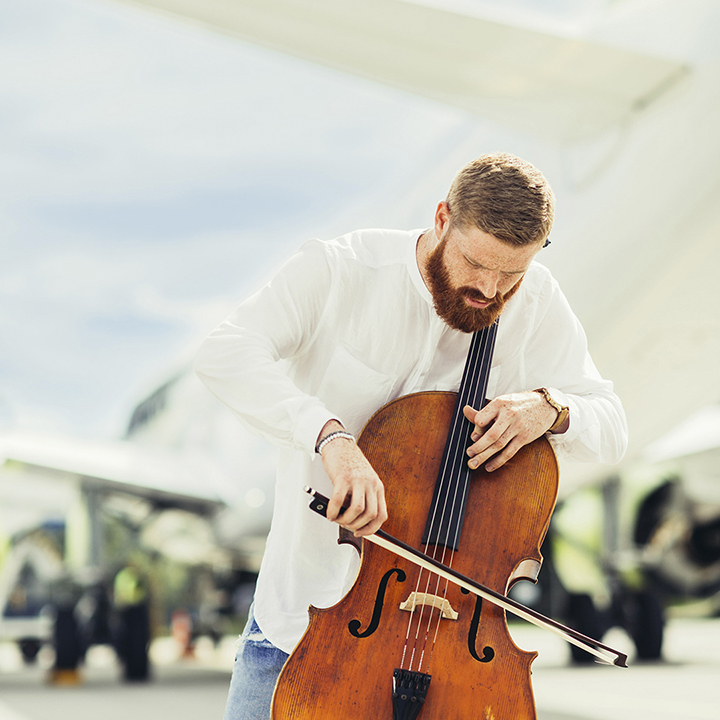 Tuuli Peltomäki
Hi Mareks! Thank you for the lovely concert today at Drottningatan! I'm a Finn and on a holiday in Stockholm - in my mind your concert was the most memorable part of my stay.
Emilie Herheim
“Hey I just wanted to say that you play very beautifully! I have played violin for 8 years now and I admire your passion for the cello. I hope you take a trip to Norway and share with us your amazing talent.” "
Veronika & Irene
“We could listen to you playing ALL DAY! GOOD LUCK! Wish you the best!”
Lucie
“I spend 3 evenings here, changing people who stopped to listen to you. That was 3 really cool evenings. So thank you very much for this time. Keep playing, you’re awesome!”